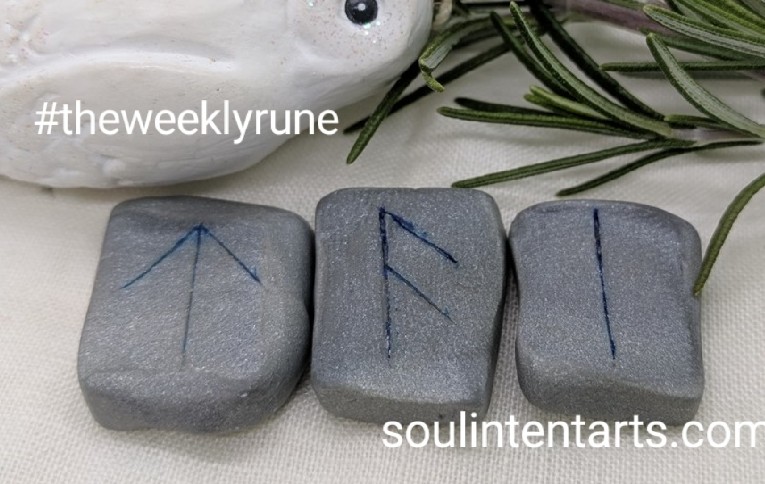 
Isa is the half-month stave through 13 December. Ansuz is the intuitive stave, and Tiwaz indicates the planet’s message to us. Read right to left is Isa, Ansuz, then Tiwaz.

Isa has shown us that we won’t move forward from the current dynamic until we’ve gained the skills, foundation, and/or chutzpah to do so well. The final of the winter trio, this icy stave bears a “ring not pass” quality, in that despite how much we push and shove things to move forward, they simply won’t until they’re ready. The subtext of that is, neither will we. Isa, the culmination of the winter runes, begins an initiation within the runes that doesn’t culminate until late in the third aett. As the Elder Futhark, itself, is a wide process of initiation, when confronted with these micro cycles, it can feel a bit like doubling down. However, the initiation that starts with Isa, then progresses through Mannaz and Ingwaz is subtle. It’s internal, in that it requires us do a lot of personal tending of our needs, calling, and desires. In order to do that well, we have to master balances of the masculine and feminine.

People often point out the battle metaphors in the runes, which while on-pointe for ancient northern culture, we modern westerners think it implies a dominance of masculine polarity, with a lack of feminine. Look again.

While I have a theory that the polarities of masculine and feminine are breaking down, they are still very strong in our psyche. At base levels, the role of the feminine is to stir the inner worlds, so that dreams become plans, which become manifestations. The role of the masculine is to contain the feminine, to protect it so that inner work can be done. If the feminine doesn’t get to complete her process, there’s no  manifestation. If there’s no manifestation, the masculine has nothing to protect. Aspects of humanity that don’t have a job, that don’t get to serve their purpose, become blocks not just to individual accomplishment, but to the entire community. Masculine and feminine are useless without each other. We are useless when we don’t heal and allow the development of both.

This balance is the foundation of the Isa initiation. The protection and nurture of the sacred seed (Isa) is the initiation of the feminine’s job that’s playing out behind the scenes of the progression of the rest of the second third aetts–which the masculine are working to ensure will come to pass. Our culture has focused on the masculine. Isa challenges us to remember and tend both.

How appropriate then, that Ansuz is the stave describing how we can best do that. Often translated as “mouth,” Ansuz is really about breath, or that force which makes everything possible. Our ability to engage the mysterious process of breathing, so that we can be, do, show up is the most potent alchemy there is.

The significant thing about Ansuz is that it comes right after lessons in clarifying intent (Thurisaz), and before deciding how we tell our story (Raidho). With that framing comes the assumption that we’ve figured out what to do with our breath. We’ve figured out how to speak truth, which is the magickal formula that makes life satisfying. If we can’t speak what we mean, what we need, how we see life and ourselves in it, then we can’t create from within our own power.

That would be a tragic loss. The hint here is, take some time this week to consider how we arrive at our truth, and how that ties into newly revealed needs.  It’s likely sticky territory, because those are the synapses that generate life change. Once we realize our needs and truth, we can’t stay the same. When we change, it makes other people uncomfortable. It makes jobs and relationships not fit anymore. Given the bustling holiday season, this may not be great timing for such personal revelation. However, the winter trio occurs this time each year. Find some solace in the season knowing how to support us its impact.

The sticking point of this week lies again with the planet’s affirmation of Tiwaz. It smacks of something that needs to be let go.  Clinging to some failing Plan A is preventing the successful Plan B from coming. Again, because Tiwaz isn’t the half-month stave, it doesn’t mean significant heart upheaval. Rather, it means holding a general place of adaptation. Anything gripped tightly right now, particularly if it would interfere with the nurture of the feminine or the timeframe of fostering the sacred seed, needs to be examined. Yes, it’s a busy time, though the craziness of hols may give exactly the cover needed to weed out heart, path, and wyrd.

And Winter Solstice is right around the corner. Take the time to shore up loose ends now, to greet that closure well.