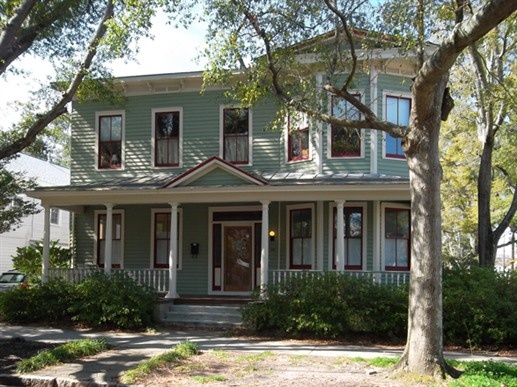 Every year I honor The Dead Time by posting some of my creepier accounts mucking about in the Middle World. In 2012, I compiled them, along with a few new stories, in  Real Wyrd: A Modern Shaman’s Roots in the Middle World.
Without question, the posts that get the most traffic on Intentional Insights are the ones in my Dead Time series. I’ve written it since the inception of this blog in 2004, and it has many fans. I’ve noticed, though, that despite its reception, I still get asked to shared new scary stuff on my blog every Samhain. One of the more recent in my experiences took place in Wilmington, and I am reminded never to underestimate how wyrd things can be.

As many North Carolinians know, Wilmington is famous for pirate lore and ocean legends. But a haunted Wilmington experience was not meant to be the center of Kelley Harrell and Susan Wimmer’s beach vacation.

Nestled in the Historic District of Downtown Wilmington, you will find the Old North Inn, a former bed & breakfast, that now rents as a private home. This quiet residence offers more than what meets the eye, as Kelley Harrell and Susan Wimmer share their encounters with a restless former tenant, who floats into dreams and shouts angry threats at some visitors.

As a lifelong intuitive, I’ve had paranormal experiences since childhood. I’ve visited with the dead, trained in techniques to release them, learned to interact with animal and nature spirits, and even how to help souls of the living. I now work as a modern shaman, helping others work through the spiritual concerns in their lives.

All of that considered, when I plan to take a vacation, I want it to be a vacation from everything–even the unseen.

Sometimes it doesn’t work out that way.

In November of 2013, a group of friends gathered at the Old North Inn on 6th Street in Wilmington, NC, for a week-long birthday celebration. The former B&B is a beautiful Victorian home in the Historic District of Downtown Wilmington. Decorated simply, the inn was warm and welcoming, as were our eager hosts.

Staying only a couple of days, my love and I were assigned the back deck suite, an enormous yet cozy room that opened to a balcony overlooking the rear garden.

I get vibes on everything, and the old inn was no different. Anytime I travel and stay in shared space, I do a check-in with the space, itself, and any spirits that may be there. My ritual consists of introducing myself, stating my intentions for being there, and a general agreement to be respectful of the space. Once we were settled, I did my little woowoo orientation and everything was fine.

The house, though darkly decorated, had a wonderfully inviting air. Despite that it’s a very old home that’s seen lots of visitors over the years, to my senses it was fairly clear. All shared spaces, like hotels, hospitals, or public areas, have a certain “busy-ness” about them energetically, that I just assume and overlook. The inn was no different. Beyond that, I felt a feminine presence in the kitchen, and as though I wasn’t alone no matter where I went in the house. All considered, the space was clear.

After a fun afternoon of games, a luscious dinner, and great conversation, I headed up to bed by myself. As I tucked myself in, the laughter of everyone still downstairs echoed through the house. As I relaxed into half-sleep, a loud rustling began reverberating through the room. My first thought was that it sounded similar to my last hair-raising experience at Hotel Phillips, in Kansas City, MO, several years ago–again, in a public space. Thumping in the walls across from the bed hammered louder and louder, until it vibrated from beneath me, in the bed.

I have zero shame in saying it startled me terribly, and I roused fully awake. The sound continued, and I raised up in the bed. There was no distinct focal point, though I heard many voices whispering, “Get out. Leave Go.”

As I processed what I was feeling and hearing, the bright red face of an older man with short-cropped blond hair swooped from across the room to mere inches from my nose,. The being bellowed, “WHORE!”

The being backed away from my face, though his life force wrapped around me, and I lay smothered in the bed. I couldn’t move. He was furious about something that had nothing to do with me, or with our group being in the house.

His anger bordered on wrath, and he’d been attached to the house for many years. His appearance struck me as a soldier–as in, centuries before me-era soldier. As I took in his details, I realized that this guy wasn’t interested in healing or releasing his hold on the house, and I mostly just wanted to get some sleep.

After a few seconds, I said aloud as gracefully as possible,”Well, whores have to have sleep, too. So we can continue this conversation at a later time when I’m better rested. I’m done, now.”

Instantly, his life force retreated from my personal space, and I sensed that the being had no idea how to process my reaction. I didn’t either, really, but it was honest, and it worked. The presence left, the room became quiet, and I finally fell asleep.

The next day I spoke to one of our hosts about my experience. Turns out, she had her own interesting story to relate.

Five separate orbs captured in this picture of one of the North Inn bedrooms.

Right up front, let’s set the record straight. I am no Kelley Harrell, whose skills are highly honed. I’m just a regular run-of-the-mill pathologically empathetic individual. I’m sensitive to the energy that flows within and around all of us, and I listen to trees. I also pay attention when a story persistently pops into my head, especially when it is related to my surroundings.

When I saw Kelley the first morning of our rental, I asked her, as one often does, how she had slept.

“Fine,” she answered, “if you don’t mind being called a whore by a clearly angry spirit!”

I asked her if it was a man with short blond curly hair, wearing some sort of military uniform. I had been feeling the story of such a man since we entered the home, and he’d tromped through my dreams the night before.

Kelley confirmed the description and we both just had one of those moments where you look at each other, knowing you know something. I hadn’t had any experience on the order of Kelley’s, but the coincidence was interesting at the least.

Kelley and her partner left that afternoon. Over the course of the next week, two more couples stayed in the bedroom at the back of the home. No one reported a direct experience, but my dreams continued to tell a story of a broken soldier coming home and releasing it all on his wife, accusing her of all sorts of terrible misdeeds.

The Old North Inn was once the Craft House, and prior to that the history is sketchy. The building isn’t on the historic registry for Wilmington, so the research hasn’t been done. I would enjoy a return trip with Kelley to explore it further, and would gladly promise that she wouldn’t have to sleep in the bedroom on the second floor at the back of the house.

Nor would I. Just in case.

We have found no history on the Old North Inn or who the man might be. If anyone out there knows any legends or historic tales surrounding this Inn, please send them our way so we can dig even deeper into this story.