Life Betwixt – There is No Center 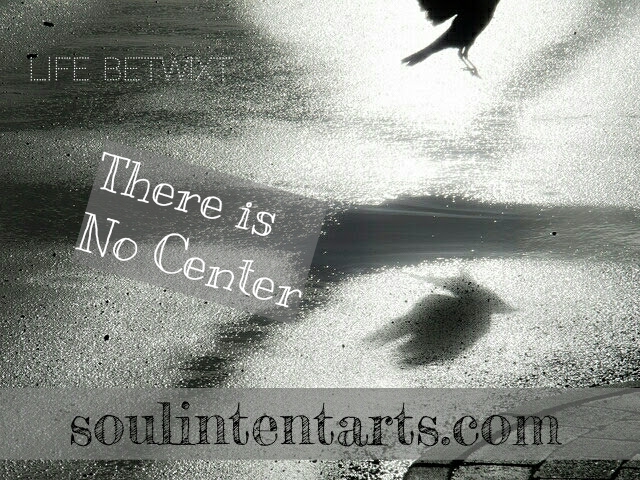 Why center has changed, what that lack looks like in daily life, and how to adapt well without it.


For the last two years, my clients, students, and Initiates have said one thing repeatedly, “No matter what I do, I can’t find center.”

Welcome to the club. I’ve talked a lot in the Betwixt Series about a general sense that the ball dropped in 2008, at which point even the most well-grounded folks, solid on their path suddenly found themselves upended in the middle of nowhere.  I’m talking pros with mad skills, in the habit of using them every day to stay in direct relationship to bear their medicine to community, then suddenly it all stopped working.

I’m one of those people, and when that happened, part of my re-commitment to my community was to tell the truth about that fact: It’s not just you. Yes, something bigger is happening. No, you can’t find center, and here’s why.

At the time, I told them what my guides told me. “Yes, you can find center, though it keeps moving.” And it did. I could use my faithful rituals and ally work to get back to center… for about five minutes. It was completely findable, but it didn’t last. This was a harsh reality after the privilege of years of the same tricks working.

About a year ago, it got even more difficult. I could find center, though it didn’t feel the same. Finding it brought no solace, peace, balance, clarity, or whatever I sought in the moment. In fact, all it brought was the awareness that I was looking for something that no longer satisfied my needs, which left me questioning if my needs were what I thought they were, or if I was acting on memory–however sacred. I wondered how in the world I would ever meet needs if also what I expected to be on the other end of satiation couldn’t be identified, or wasn’t even identifiable.

The new phrase from my guides was, “Yes, you can still find center, and it is still moving. It’s also now invisible.”

Well spotted. I could still sense need. I could sense the process that used to work to fill needs. I could connect with the state I called center–that for so long had brought peace to need–yet repeatedly, it all fell apart.

About the time I pieced this together, I got a unique message from the Watchers, which I shared in February of last year.  I was told the Land Elders were leaving from various positions about the globe, that Spirit Guides were vacant or completely unavailable (because they are managing their own upgrades), and that Nature would experience a cataclysmic revival beyond anything in human memory, leaving Earth radically changed.  From the mouths of the Watchers, I was told the Earth would experience soul loss, that this shift would be soon, and that we would be tended by them, during and after.

Then of course the Watchers left, too. After that point, I stopped trying to find center, and focused on the mayhem of daily life.  I threw support to the Earth soul frequently, all the while honoring the manifestation that loss took in the form of humbling death, hardship, and shadow for us all.

Last week, for the first time in all of these years, the tone of the message changed. It was very short: “You have turned a corner. Feel Life.”

I knew it wasn’t talking about me personally, but the life force coming into the planet, now. It indicated a change of trajectory for us all. Since 2008, and most focused around Winter Solstice of 2012, we’ve all been told how the planetary life force is shifting, how we’re moving into a state of more united consciousness (or returning to one?). However, the New Age gave projections of it looking more cohesive, shiny, and dare I say, a bit fluffy around the edges. Anyone who’s ever mapped deep change knows the transition between what isn’t working to what workable state can replace it knows that transition is a bitch.

Enter the last few years, and specifically, the last year.

“So, we’ve turned the corner; I can find center now?” you ask.

Here’s the thing. The caveat of the latest soul memo is that there is no center.

I know. It flies in the face of everything the New Age or Gwenyth Paltrow has ever taught us about awareness.

My understanding of having turned this corner is that the dust hasn’t settled from the previous trajectory, and that air of unsettled business gives off a false sense of still being in BIG transition. In reality, we’re done with that era. We’re now at 1-2 degrees of this new energy, though while technically not in the old space, we still feel the impact of its power, combined with the fact that it just won’t stop kicking. The take-away is, it will, and we’ve known this ever since the Age of Aquarius won back its cred as the era of community.

The new life force is here, as new gods, new guides, new you, or a new whatever you need to let go of your old stuff and find what’s better suited. What’s available to us energetically has upgraded. The systems, the institutions, the state of being, the people–all of it has to choose to flow with the new juice. And of course, no one has to choose to do so. However, what doesn’t flow with the new way will get plowed over, including isms, economies, governments, and really well-meaning people who just refuse to feel differently. Just because the new way bears greater potential for community doesn’t mean it will be kind for those who can’t get with the program. Refusal is conflict, whether it comes in the form of outright resistance, or simply trying to force old grounding rituals.

We come by it honestly. We were sold a mortgage on center = permanent. Life might come along and dislodge us from it, but center would remain where we left it, and be retrievable despite storm. It would always look and feel the same.

The thing is, we grow and we change. So, too, must our most sacred of temples, our coping skills.

Any holy space we imbue with such importance as to pull us back from the brink over and over can’t help but create dependency, which leaves us unwilling to stay sharp. It leaves us unmotivated to hone our own ability to look for, let alone make use of new balance. And of course the greatest tool there has ever been is the one we’re being told to feel now, and it’s not new. Feel is the operative word. When I first was told about the coming change in February 2016, I thought it indicated a single event that included raised consciousness, deep planetary loss and soul healing, and recovery. I realize now it will span time, with part of it recently completed, and other changes to come. The life force transition has happened now, so that we can be ready for the rest of it. The hint is that we won’t handle (maybe even survive) what’s coming well if we don’t update. We won’t update if we don’t feel, yet feeling doesn’t feel so great, right now. We’ve had months of statuses telling us the world’s gone nuts, alongside a lifetime surplus of collective crap to feel our way through, a backlog, if you will, of unprocessed dead that needs to move on. It only moves on if we feel it, then let it go. Then, we update. Then we become actually capable of dealing with now. We become able to live our sacred duties.

Good question. It looks like asking daily, if not more frequently, how the current Life flow feels. By that I mean, sense the flow of life force that is forward and sustaining, for the planet and beyond. Take a few moments off the top of every day to feel how things are moving collectively. Go with the sense of that, then feel your personal flow. Ask yourself: Do I flow with collective Life? If so, support it. Make every action during the day one that fosters staying in that stream. If it doesn’t, examine what needs to change, and do it. Making these changes are what thwart conflict with the times that are upon us. These changes are our survival–mine and yours–in a new world.

That is, of course, the hard part. Chances are you’re reading this post because you have a fairly open mind. You’ve got good skills. However, none of us are in flow with Life 24/7. Mundane life happens. It will continue to happen and challenge us at the pace of multiple crises, and we need to be able to find the thread through it.

The thread is realizing your deepest coping skills may no longer work. Your most holy of inner temples may no longer be there, and instead of trying to force it or leap to a new saviour, step out of the habit of ritual. Embrace adaptability as an ally. Call it in.

Adaptability is the new ritual.

Center was never a destination. Rather, it’s a process, dynamic and ever in flux. We aren’t destinations, either, and we’ve just taken a new exit.