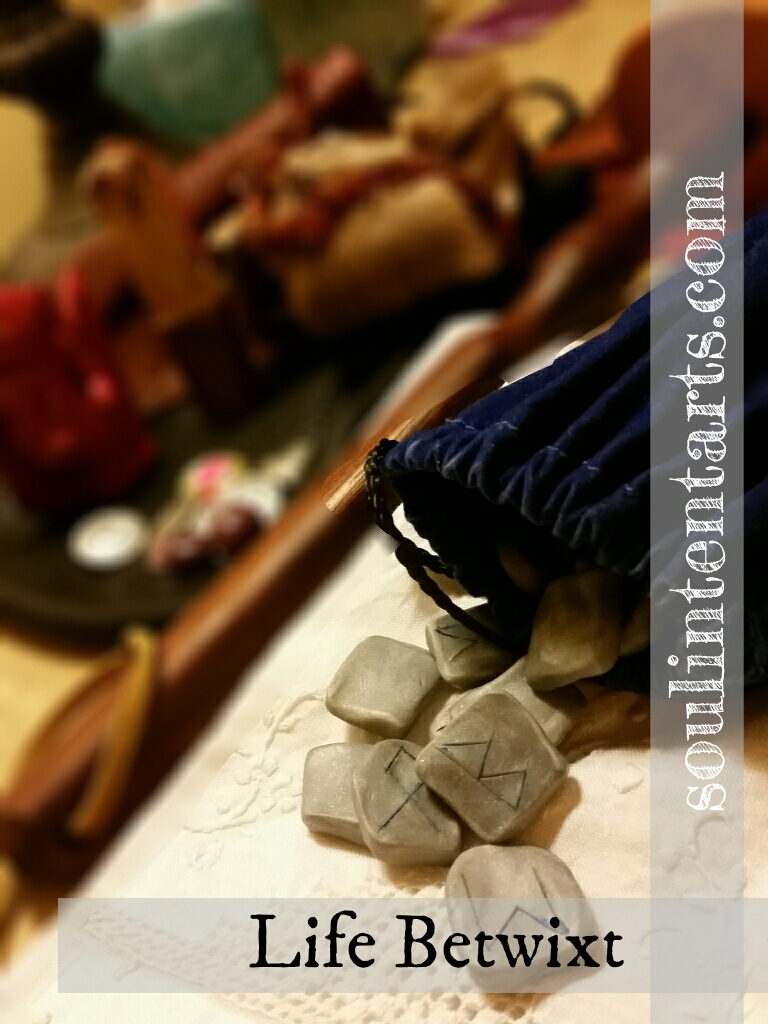 Throughout the Betwixt Series I’ve emphasized that shamanism isn’t called ‘fire in the head’ for no reason.

It’s inextricable from mental illness because we culturally can’t honor hearing voices and engaging trance states without also projecting judgement onto sanity and credibility. Schizophrenia and bipolar conditions are most often associated with shamanism, though I  posit that depression touches every soul tender in some way, at some point on their path. I cycle with it, still.

Cultural bias aside, soul tending is a challenging path, one that undertaken lightly quickly grounds into stark initiation. So intense are they once begun that incomplete initiations become PTSD. I frequently tell my students that yes, the spirits call you, but you decide to answer, and part of that decision is learning to navigate life betwixt. It isn’t innate. Learning mindfulness, coping skills, and self-care are requirements. While engaging the unseen may be intuitive, knowing what to do with what’s found there isn’t. Having experiences that set you apart from the pack may be profound, though not being able to talk to anyone about them is isolating. That judgement is real. Being a natural in mastering ecstatic techniques may be a blessing, though lacking coping skills to deal with the onslaught of empathy generated by them incites deep crisis.

These are facts that I’ve witnessed, repeatedly, both on my own path and in being present for others working theirs. Such are the sensitive points that many seekers turn away from shamanism, completely. Regardless of how giddy the heart or powerful the spirit ally, the reality of the challenges of shamanism set in for all who tread there, eventually.

For those that stay and complete the initiation, these are the moments that undermine their sanity, terrorize their dreams, and subvert their deepest truths.  Fun yet?

From there, the path progresses from personal exploration and healing to one of universal integration and healing. It becomes bigger than the self, as does the potential for trigger. It isn’t possible to over dramatize how it feels to witness the spiritual source of horror and hatred, then somehow manage to still forge self and stability–getting the bills paid, lunch made, and clean clothes on the family. In the face of such, why stay? Why stick it out?

Therein lies the real rub. We’ve conditioned ourselves to think that the shadow aspects of soul tending are paranormal bumps in the night, suffering spirits in the New Age closet, and confrontation of personal and collective wounds. We’ve assimilated the notion that it’s our job to heal everything,  yet not talk about the wounds that emerge from the work, itself. These ghosts are the very same depression of our waking moments, yes? What we fear, what we fail, what we fake.

The work takes a toll. However, those haunts aren’t what creep into the hearts of modern shamans and hold them stricken. They aren’t what sit so heavily on our shoulders, and sustain the fire in our heads. Shadow isn’t what does soul tenders in. In fact, you can’t be long on the path without realizing that Shadow isn’t even Shadow. We think it’s prescribed darkness. We think it’s the boogeyman crafted by our unique psyche, waiting to do us in. It’s none of those.

Shadow is what we don’t know about ourselves and the world around us, and what most of us don’t know isn’t what’s dark, but what’s sweet, beautiful, breakable. Shadow is sublime beauty and balance. It’s the empowered feminine and benevolent masculine. It’s experiencing deeper interconnection than any human can imagine, yet is part of. It’s Nature as engaged fae and Other, and worlds within worlds. It’s perfect compassion, unrelenting unconditional love, life Before, life After, life Beyond. It’s unraveling the riddle of the Unknown, and realizing you’re part of its Unknowable.

You can’t participate in these things and come back to everyday life the same, let alone satisfied. That’s why we keep doing it. That’s why it affects us so deeply. The soul of war and wounding hurts, though its wounds pale beside memories of just how charmed and beguiling Other life is. I’ve never had complications bringing a client back from a dismemberment or depossession, though there have been several occasions that I had to coax clients back into their bodies after meeting long lost allies, exploring light worlds that feel like a first-ever homecoming.

When we venture out with intention, we encounter states of perfection that waking life can’t sustain. It’s not built to sustain them, yet some part of us is them. We seek them out, over and over. Yes, the lure for soul tending can become escapist, creating another recipe for crisis.

How do we stay tender to the magick of All Things, yet remain functional, progressive in the drudgery of formed being? That is the age-old question. It isn’t whether shamanism is real, or who gets to be recognized as one, or if it’s another word for crazy. Because no matter how attuned to the beauty and wonder of physicality, no matter how in love, how devoted to being here, it’s not the light experience ever awaiting us Out There. It just isn’t.

Living betwixt is the conundrum that shamans face from day one, to the last. The hardest part of the role of shaman isn’t being between worlds, but living between states of being. Ecstasy, itself, is altered. Actively, directly, willfully engaging it is leaving self open to states of being beyond our control. We can’t know how they will affect us until we’re already changed. We learn the walk, the talk, the work, yet keeping our hearts open and well is the true job. And on the best of days, with the most powerful healing, returning from the sweetest of soul travels, that work can look a lot like depression.